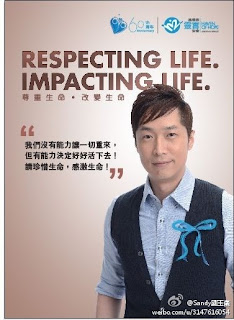 Impacting Life through giving help and opportunities to others
Because of his background, his mother's battle with cancer and a social conscience instilled in him by his parents, Steven had aspired since young to give back to society and to impact lives through actions and through giving others help and opportunities to better themselves. After high school Steven applied for a social worker position but was rejected because he did not have the required Form 7 academic credentials.  (1) Hence his mother's doctors, nurses and the hospital personnels and staff first inspired him with their kindness and help given to his mother. Till now Steven still do Hospitals promo video.


I dare not say I like to help people since young, I'm not that great. On the contrary, what I want to say is that when young I often had the opportunity to receive other people's help.[..]So to me, helping others or giving opportunity to others is very important because I myself have received plenty. So if it is within my effort, I hope to help other people. (2005)

1999 Steven was devastated when his mother died and he withdrawn into sorrow and depression. He isolated himself at home for three months or so until he was enlightened by Tang Jun Yi's (唐君毅) book given to him by good friend, Tsui Yong Yong.

2002 Steven established his own publishing company (出色堂) so that he could publish books of interest to him. He stressed he did not publish books specifically for profit or for fame.  2006 news:  "Only 2000 odd books are published per run. It’s a breakeven, can’t even make profits. So what fame is there to laud? What compliments are there to fish?" .  His objective he said was to give his readers different perspectives on life so that they could get through their problems or get back on life after a devastating setback. The materials of his published books drew heavily on his childhood background, which include: suicide, the family of a cancer patient and problem teenagers. (2)


2005: I feel that people in general need other people’s perspectives and assistance. [..] If they could somehow benefit just one person, I would be very happy indeed[..]

There are other mediums I could use, too. Besides books, I could also do it through TV series by choosing different kinds of characters to portray. I could even write scripts. And also, my characters could convey what I want to communicate to the public. Really not necessary to strictly do it through printed words. Printed words are indeed important, but images/videos could also be used as well as audio.

Over the years Steven has given back to society through his numerous charity works. Today, Steven continues to impact lives through his books, words, charities, actions and his work.  Steven said his new music album is composed mostly of Christian songs.